Posted on November 30, 2012 in Uncategorized 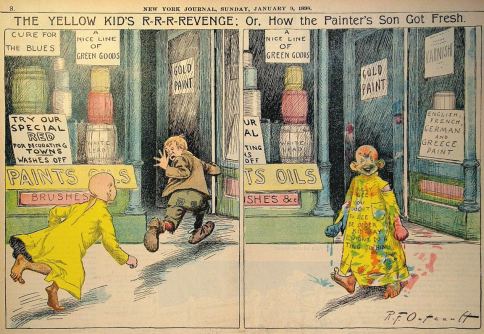 Richard Outcault was the creator of ‘the Yellow Kid’ one of the first successful comic strip characters, having the character in a publication actually improved the sales. The comic didn’t use any of the now seen to be normal comic features, such as speech bubbles and action lines, even though in situations there could have been, with the last of the three images above with only the use of the characters poses to show the movement and action. Without the use of emotion lines, the comic uses more exaggerated facial expressions and poses to tell the reader.

In Bud Fisher’s ‘Mutt and Jeff’ there is a lot of exaggerated poses and use of action lines to portray the movements and extra symbols to help explain what is happening in the panels.

‘Krazy Kat’ like ‘Mutt and Jeff’ uses a lot of exaggerated poses and action lines and symbols to express the movements and emotions of the characters further.

Overall from the research it appears that the comics like Richard Outcault’s ‘the Yellow Kid’ and Winsor McCay’s ‘Little Nemo in Slumberland’, which are drawn more realistically and less aesthetically ‘cartoony’ don’t use the use of symbols and action lines to help convey actions in their comics, whereas the more ‘cartoony’ comic strips like ‘the Kalzenjammer Kids’ and ‘Mutt and Jeff’ use the symbols to over exaggerate the movements and actions of the characters and rely less on the facial expressions of the characters, Krazy Kat is the best example of this because the characters are very simplified having just a nose and two dots for eyes and a mouth. Personally, to me the more ‘cartoony’ comic strips have a feeling of Buster Keaton films.

I think with my first test I’ll animate a more exaggerated interaction between two characters looking at Buster Keaton films as reference and try incorporating the comic strip symbols into the piece in post production. I will keep the character very simply and rely mainly on the added symbols to explain the movements and actions of the characters. I will then assess how the use of the symbols helps the animation.

Doodles i did over the weekend, so thought i’d post them.

Here’s the finished warrior I modelled. It didn’t come out as good as I wanted it but overall I’m happy with it as a warm up for getting back into 3D. 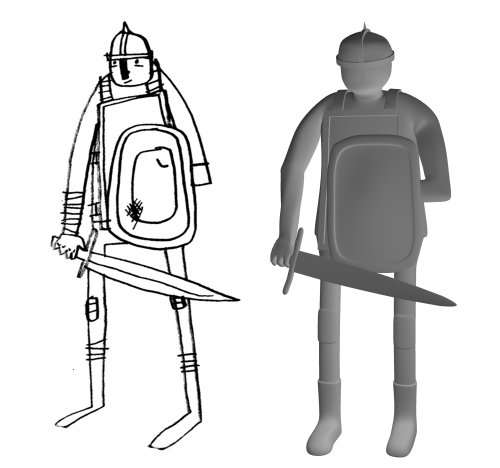 I still need to add the line work over the top of the model also, which i think will help it also. During my research i came across the word ‘Squigglevision’ in a couple of journals and it is the technique I’ve been using of having multiple outlines changing to add some movement and ‘life’ into the picture. Squigglevision is a technique that was patented by Tom Synder, who has used the technique for different web and tv cartoons. Tom Synder uses the technique to give movement to his cartoons because they are fairly low animation cartoons to the use of the ‘squiggly’ lines helps with the cartoons to add my movement. I personally don’t like the cartoons and don’t think it really helps at all in the cartoons, and would much rather use the technique to add an extra element to an animation or character rather than it being a cheap way to avoid a lot of animating, but he’s making money off it and it seems popular so there you go.

The  second piece I’ve done this week in Maya came about after i watched the making of ‘Lost and Found’, an animation by Studio AKA based on Oliver Jeffers book, of the same title.  I’m not sure if that video is the full making of that is on the Lost and found DVD because on the vimeo video it seems to cut out short. but from it they are talking about how they translated the illustrations and characters by Oliver Jeffers into 3D, the main part that interested me was how they modelled and rigged the face, because the character is basically a circle with two dots for eyes, similar to the eyes I draw.

The way I have been doing eyes is to have a switchable texture (I forget the name of the tool in 3ds max) to go from one emotion to another that I have drawn on the uv, where as with Lost and Found they have modelled the eyes and mouth. Modelling the eyes and mouth means more fluid movements from different facial expressions using morph target/blend shapes, which I think would probably work better than having the expressions quickly flick from one to another, it would also be easier and more fluid to lip sync a character. below is the render of a quick model I did with the eyes and mouth modelled and textured with just a black lambert texture.

I think it overall works well and looks like how I draw eyes and a mouth, because they are basically dots and a line, the eyes might need to be a bit smaller, but I think it works well and would have probably helped to of used a reference sketch to get everything in places according to my drawings, but when i start to also draw over the top of the model to add extra details to it, i think it should look good. I quite like the idea of modelling the eyes and mouth because one of the reasons for trying to get a drawn look into 3D is to have the use of the animation tools such as blend shapes, rather than having to draw the facial feature every frame and also guessing where they should be at more awkward camera angles.

During my research I came across this paper by Dash Shaw called ‘Cartooning Symbolia‘, it’s really useful for showing all the different types of symbols and lines, with a description of which one is used for what. the other useful thing about the paper is having actual names for each symbol. I think a lot of the paper comes from Mort Walkers ‘The Lexicon of Comicana‘ which was intended to be more of a jokingly written book giving names to these variety of comic book symbols but the names for them have now seemed to of stuck. Overall there isn’t a lot more research into the subject I can do that I think will benefit me for my project. I’ve re-drawn a few of the symbols below because I just found myself doodling them as I was writing notes.

The second part of research into comic book symbols and movement lines, was to see where and how it has been incorporated into animation, the main areas I was looking at were earlier Tom and Jerry cartoons, but a lot of them only use a couple of different symbols and mainly just used the occasional movement line. But I was listening to one of the Skwigly podcasts and they were talking about Genndy Tartakovsky, as he was interviewed by them for Hotel Transylvania, and after they played the interview they were talking about his other work and Dexter’s Laboratory along with his other work such as Samurai Jack and The Powerpuff Girls, came up and I remember watching Dexter’s Laboratory when I was younger, so I decided to try and find some, and luckily as I was watching there was a lot of comic book symbols being used in it. I still need to research animations using comic book symbols more and I’ll do a post on in at a later date.

So this week we’ve had a Self Study Week, and I thought I best blog what I’ve been doing for it, I’ll do a rough outline in this post then go into each area in more detail on separate posts.

Most of the week I’ve been researching and trying to find relevant books and journals to help with my project. I’ve found a good paper by Dash Shaw that shows all the comic book emotion lines and all named, which is quite useful. along with that I’ve been searching for animations that have used comic book symbols to ethicise emotions and movements within the animation.

Secondly I started researching into Non Photorealistic Rendering (NPR), and I could only find one useful journal (Non-Photorealistic Rendering: Unleashing the Artist’s Imagination) on the subject with a lot of references and names of artists and animators, but a lot of the references led me down a dark path of NPR algorithms and a lot of coding to get the render to look like 2D, and personally a lot didn’t seem to achieve to goal that well. One journal I found by Thomas Luft, although a bit complex, achieved a really nice watercolour render. Another paper I came across through this journal, which is slightly off topic of my research, was a discussion by Thierry Chaminade that looks into motion capture animation, and whether it works better with a more stylised character than with a photo realistic character, again I haven’t read through it in detail yet but will when I get some free time as it’s looks like quite an interesting read.

Whilst researching I also came across a book by Tina O’Hailey called Hybrid Animation: Integrating 2D and 3D Assets, which luckily I can download the online version through the library, so I’ve got that to start reading. Also from finding this I’ve found a better way of describing what my I’m trying to achieve with my animations and could probably change my question to incorporating the phrase ‘Hybrid Animation’ rather than the lengthy way of writing incorporating 2D drawings into 3D animation. Having a quick scan through the book it looks quite interesting and go into detail of different techniques of either having a 2D character with 3D environments and assets or the alternative of having a 3D character with 2D environments and assets.

Along with all the research I’ve been doing little bits of work in Maya, finishing of my warrior character (previous post) and also trying a different approach to my characters faces into 3D, which I’ll post as well